During Christian holidays, I usually work. But last night, I sat in a bar in Rome with F. and our Italian friend S. who is thinking about migrating to Canada. We talked about how we, master students of chemistry, engineering and law, will probably end up homeless soon. „In Italy, too many young people study law“, S. tells us. „My friend, who is a studied lawyer, works for… how do you call it when somebody cleans the streets?“ Southern Italy really needs help with its trash problem, anybody should join the working class – even when they just got in dept with a huge student loan to graduate from university like their parents wanted them to. The academic teaching here is excellent, but useless, because there are no jobs. Italy’s capital is in a major crisis and the new symbol of it is the poor Spelacchio.

Spelacchio is how the citizens of Rome named the Christmas tree of the city on the Piazza Venezia. It means something like shabby, sheared or threadbare. Spelacchio is an embarrassment for Italy, but especially for Rome and the city’s mayor Virginia Raggi.

Raggi was elected last year after she promised to fight the pervasive corruption in the city and stop Rome from running more and more into dept. The tree and its transport cost 50,000 € altogether, according to the blog Roma Fa Schifo. The fir did not survive the transport, though. Of course, the Vatican has a different Christmas tree, so that all the shame goes for the very catholic Rome. By the way: Roma Fa Schifo means Rome sucks. The sad thing is, when it comes to administration, it’s true. 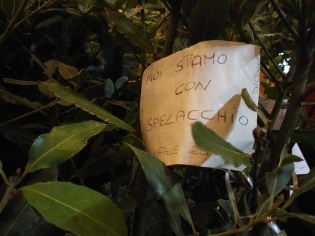 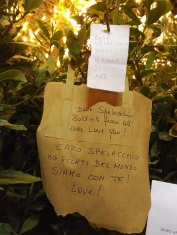 What hurts the Romans most is that their arch enemies from Milan have, again, a huge sparkly Christmas tree which was sponsored by a company, so that the city saved a lot of costs. Rome might be the political and historical capital of Italy, but Milan is considered the industrial capital. The whole North of the country is known to be better organized and rich compared to the South. Right-wing parties such as Lega Nord have even advocated for a division between North and South. Therefore, it is no surprise that Matteo Salvini of Lega Nord used the whole tree disaster of Rome to emphasise how awesome the North is, saying that Milan could donate a Christmas tree to Rome next year and also a crib „if it does not offend anyone“.  He is clearly not only speaking about Christians from Rome. Salvini uses every occasion to insult non-Christians.

After the Italian press wrote many cynical and ironic articles about the case of Spelacchio, the Austrian, German and English press followed, calling the poor tree „skeletal“ (The Times)  and worse. Soon, the sad tree became famous outside of Italy. But the Romans try to take the embarrassment with humour. Spelacchio has it’s own Twitter account and in real life, citizens and tourists put notes around the tree, on which encouraging messages are written: „Je suis spelacchio“, „You are beautiful, no matter what they say“, „Spelacchio Ultras“, „Spelacchio is one of us“. Protesting humorously is one of the great Italian arts which German citizens yet have to learn. The unceasing mismanagement in Southern Italy will not be solved with jokes, though. Mayor Raggi, also a law-graduate of course, has a very difficult job. But at least she found one. In 2018, she has to deliver an action plan which can actually overthrow century-old structures of corruption, or the so-called eternal city will become an eternal joke. One can only hope that poor Spelacchio motivates some non-corrupt politicians to keep fighting the Mafia and put Lega Nord in their place. Come on, useless law students of Rome, we can do it!

This site uses Akismet to reduce spam. Learn how your comment data is processed.